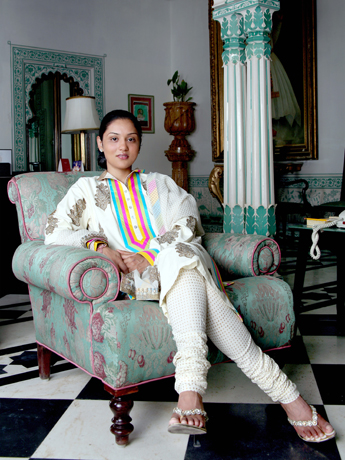 Padmaja Kumari Parmar represents the third generation of heritage-hoteliers at the Historic Resort Hotels, often referred to as the HRH Group of Hotels. It is India's only chain of heritage palace-hotels under private ownership. Headquartered in Udaipur, a city founded in 1559 on the banks of Lake Pichola, the HRH Group is preserving royal palaces as 'heritage grand hotels' and offering authentic regal experiences on island-palaces and historic venues. Shiv Niwas Palace, Fateh Prakash Palace and Jagmandir Island Palace in Udaipur are the flagship palace-hotels of the Group.

Padmaja, 33, is the Executive Director-Business Development of the HRH Group. The Chairman and Managing Director of the Group is her father, Shriji Arvind Singh Mewar whose illustrious family are the Custodians of the former State of Mewar since 734 A.D. Padmaja, is now living in Boston, after her marriage to Dr Kush Parmar. She is enhancing the business presence of the HRH Group in the United States, Latin American countries, and in the European Union through active participation in global travel marts and trade shows.

Padmaja is a member of the advisory board for The Bvlgari Hotel and Resorts, London the Italian luxury label, which is co-managed by UK-based Prime Hotels.

Since 2006, Padmaja has been invited to attend the Fortune Most Powerful Women Summits held every year in the US. She has utilized the opportunity to meaningfully interact with global celebrities, thought-leaders, chairpersons of multinational corporations and media persons during the Summits.

In November 2009, she attended Maharaja - Representation and Reality, a seminar at the Victoria & Albert Museum, London that covered a number of issues on how heritage has been used as an asset in today's India and how it is being re-presented and re-packaged by the tourism industry. In June 2013, Padmaja was invited by Dell as one of the top Global Women Entrepreneurs to participate in the Fourth Annual Dell Women’s Entrepreneur Network (DWEN) event in Istanbul. The event was held to share the positive impact that women-owned businesses are having on the global economy. As a panelist in the session on 'Lessons from Legacy Businesses', Padmaja shared the experiences of her family business and its strategy to work towards sustainable growth through heritage tourism.
http://www.thenextwomen.com/2013/07/15/innovation-prevails-within-1500-year-indian-family-dynasty

Padmaja's interviews and photo-features have been published in leading newspapers and magazines such as the New York Times, National Geographic (Russia), Vogue Italy, India and Latin America, Hello, The Times of India, DNA, Beautiful People, and Express Travel & Hospitality. Elected as an independent member, in the first batch of 47 independent women-members, Padmaja is a member of the famous Cricket Club of India in Mumbai, where her grandfather and father have been illustrious members. She loves to travel and spends her leisure time reading and viewing cinema from all over the world. She is a keen swimmer, tennis enthusiast and horse-rider. 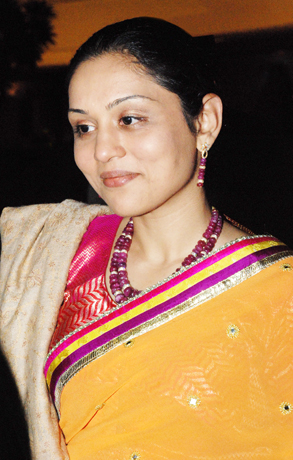 Padmaja Kumari Parmar began her career in the hospitality industry as a 'special services representative' at the iconic Four Seasons Hotel in New York. Through October 2004 to March 2006 she coordinated the hospitality for its top 100 guests. Since then, she has been giving HRH Group the benefit of her learning experience in the United States. "It was an enormous learning experience at the Four Seasons, coordinating critical activities between all the departments. For me, there was a sense of permanence in what I was learning, for I knew I would be utilizing it at a later date back home. I am happy that at HRH Group I am slowly implementing what I learnt at Four Seasons in New York," she said. Attending global travel marts at London, Berlin, Madrid, Moscow and Greece, through 2006 to 2010, Padmaja has been building new business alliances and getting first-hand knowledge of the hospitality industry and its growing demands and expectations. She has led the participation of HRH Group at major travel shows in India such as IATO, SATTE and GITB. In 2007, Padmaja received the SATTE-INTACH Award for the pioneering achievements of HRH Group in heritage tourism.

In May 2007, she addressed the OSS Network conference of foreign and Indian delegates in New Delhi.

Padmaja attended the three-day conference during the XXVI IATO Annual Convention held in September 2010 at Udaipur. The convention was focused on 'Tourism in the New World Order'. She addressed the audience, as a panelist, on the topic 'Bollywood and Tourism'. She hosted a dinner for Sr. Vice President, IATO; Addl. Director General, Tourism, Government of India; Commissioner cum Principal Secretary, Tourism, Government of Rajasthan and discussed the framing of new policies and developments in tourism sector at The Durbar Hall, Fateh Prakash Palace, Udaipur. She played a vital role in the IATO convention and organised a memorable farewell dinner for the 1500 IATO delegates from all over the country at The Manek Chowk.

In 2006-07, as part of HRH's corporate social responsibility, the Amity Polo Cup was supported in its endeavor to help the girl-child. In Kolkata, Padmaja attended the 'Samman Samaroh' organized by the Rajasthan Foundation during September 2006.

As a young business leader, Padmaja has been regularly and extensively profiled in leading magazines and newspapers in India and overseas.

Padmaja Kumari Parmar is a Trustee on the Board of Alakh Nayan Mandir, an Udaipur-based public charitable trust and medical institution dedicated to eye-care. She has also been a member of the Advisory Committee of a society at Seva Mandir, Udaipur which works for the upliftment of women.

She has been lending support to educational organizations and chambers of commerce and trade who are keen to develop and build human resources.

She was the co-patron of the 'multidisciplinary international conference on emerging issues' that was organized in August 2009 by the Udaipur-based Aishwarya Education Society, and North England Business Administration Association, USA.

Padmaja visited Jaipur on October 1, 2009 to meet a team of doctors, technicians and nursing staff from Orbis International as well as the India Office whose DC10 flying hospital was stationed at Jaipur for a 12-day visit as a part of their global program to both treat patients and train medical staff. During her interactions, Padmaja spoke about diabetes and retinopathy. She also attended the Diabetic Retinopathy Screening Camp the next day at Odhan, Nathdwara.

During October 2009, she was in New York City to attend an annual gala fund raising dinner in aid of Children's Hope for India.

Padmaja attended a seminar organized by Alakh Nayan Mandir (ANM) , Udaipur as their Special Guest at The Durbar Hall, Fateh Prakash Palace, The City Palace, Udaipur on September 29, 2010. The objective of the seminar was to create awareness amongst like-minded individuals and friends of ANM to encourage them to join hands with ANM and support its new projects and activities at Udaipur to eradicate blindness in Southern Rajasthan. Around 50 couples attended the seminar.

She attended the Mind and Life XXII Conference held at India Habitat Centre, New Delhi from November 20-23, 2010 where His Holiness the Dalai Lama, Dr. APJ Abdul Kalam, former President of India and Prof. Wolf Singer discussed the importance of scientific findings on the secular benefits of contemplative practices, especially those practices that have been originated and developed in India.